In an earlier post I discussed the growing copycat culture and the idea of compromising to get cheaper or more accessible outfits. I myself have ordered outfits which have been based on a designer's outfit, and have altered or redesigned to suit my taste or occasion. In my case, I find it difficult to get access to designers I prefer, as many of them are based in Pakistan and charge way over my budget.I also find that it is difficult to justify spending a lot of  money on a 'designer' item on the basis of the name of the designer or the label on it. I will be discussing the outfits which I have loved and have had redesigned, and their subsequent results.

One outfits which I have LOVED at first sight was this 'Coral Pink Amadora Dress', originally designed by Milli & Madiha, a new(ish) Pakistani label: 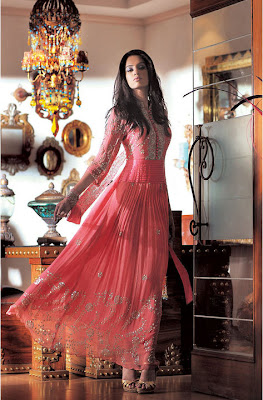 Image Source
I am sure many of you have seen this picture and loved the design, it a lovely, flattering shape in a whimsical coral pink. What I love about this design is that it does not feel too heavy or loaded with too much detail, which can make a suit look crowded, but rather retains the summery look of the dress, making it look sweet and elegant. I have had my own version of this dress made from Pakistan, albeit with alterations to suit my tastes and temperaments (excuse the dhulan-fied images!): 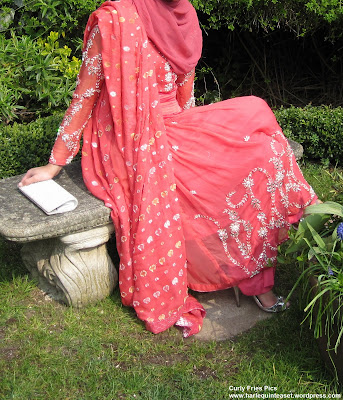 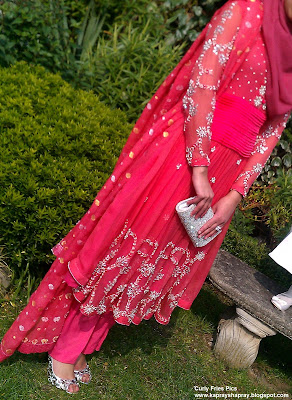 I made the length of the dress shorter so that it would be easier to wear with wide straight trousers, and I also made the sleeves longer so that they would fit to the wrists. (Please note that the colour was exactly like the first pic rather than the hot pink colour in the second!) I also requested a bigger duppatta to go with the dress, and that the designer stick to diamontes and pearls rather than sequins. 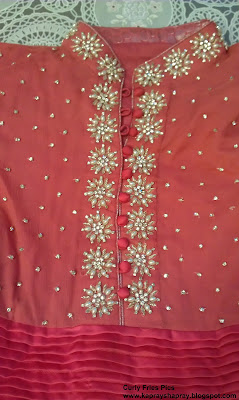 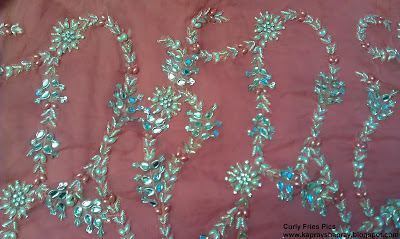 THE GOOD: I love the star-shaped pearl- and-diamante motifs lining the neckline, as it really went with the row of buttons. The fitted sleeves with work all over them were also a real eyecatcher, because they added some luxury to the outfit without making it too heavy. I also thought the pink pearls were a nice touch as they seperated the design a little and added a bit more variation to it. And of course the actual colour was spot-on, meaning that it was not too garish and flattered my skin-tone.

THE BAD: I requested that the dress be made from pure chiffon, but this kind of backfired on me, as I found the usual problem that I have with chiffon suits - the material kept catching on the dabka work and diamantes! Although this was kept to a minimum, it was still a worry as I had to make sure that the dress wouldn't get ruined! Another issue were the fact that I simply could not open the buttons at the front, as these were too small and stiff! This is more of a fault from the designer who created my dress, rather than the design of the dress itself.

THE UGLY: The sash I feel kind of spoilt a dress a little for me. In the original design, it flatters the waist and doesn't draw too much attention, but in my version it bulked out the dress too much, making the dress too A-Line shaped rather than following the natural curve of the body. Although this is a small whinge of mine, I still think that the dress could have been improved if the sash part had been minimised a lot more or even removed completely.

OVERALL: I do generally like the result of this dress, it retained the general look of the original design, and was made fairly quickly and arrived at my doorstep within about two and a half weeks, which was also handy. I also like the feminine style of the dress, as it was possible to keep it modest without it feeling dowdy or too extravagant. I was quite happy with how close to the design the dress was kept to, such as the buttons on the front of the dress and the spirally dabka/diamante design at the bottom of the dress. Although I would make a few alterations to it still, such as making it less heavier, and perhaps making the dress a bit longer, I think that the general quality of the dress was quite satisfying and the cost of it was quite reasonable.

What do you think of design and the dress?
Posted by Curly Fry at 13:53

Email ThisBlogThis!Share to TwitterShare to FacebookShare to Pinterest
Labels: Copycat DESIGNS, Coral Pink, In My Wardrobe, Milli and Madiha, Pink