I saw (and enjoyed!) Chennai Express recently and loved Deepika's role in the film, including not least, her beautifully colourful skirts and saris. Although I wasn't too sure how realistic her outfits were (especially as I'm not an expert when it comes to saris!) and I wasn't sure about the depiction of South Indian culture and fashion, I did really love the bright colours and simple styles uses for the saris and lengha/skirts (or perhaps lengha-saris) which were worn by Deepika's character.

There are several outfits in this move worn by Deepika (I think designed by Manish Malhotra, but I may be wrong!), all of which are colourful and look similar throughout the film, but I like this style as it looks consistent and creates a theme. Although some may find this a bit repetitive, I thought it worked, and it certainly makes for great colour inspiration!

First is this yellow, orange and green number worn by Deepika, which is a beautiful skirt draped with her green dupatta - this same draping is used for most of Deepika's skirts and saris in this film, but it's quite flattering. I love the colours in this outfit, bright but great for something like a mehndi outfit! 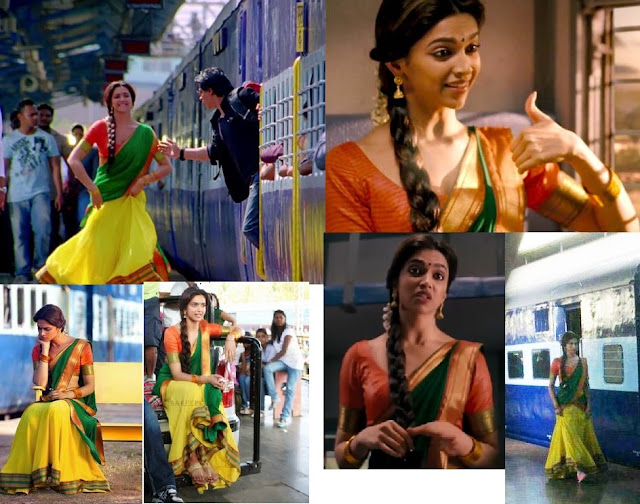 I also liked this pretty sky blue, hot pink and orange outfit, which is very similar in shape to the outfit above, but it's still a pretty outfit and again, these colours would look great for a mehndi outfit. 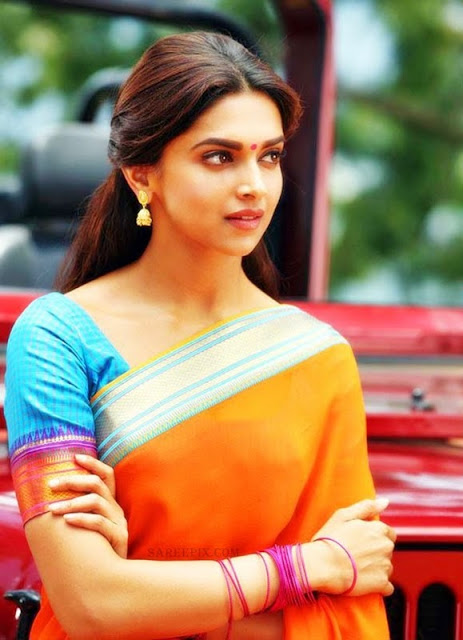 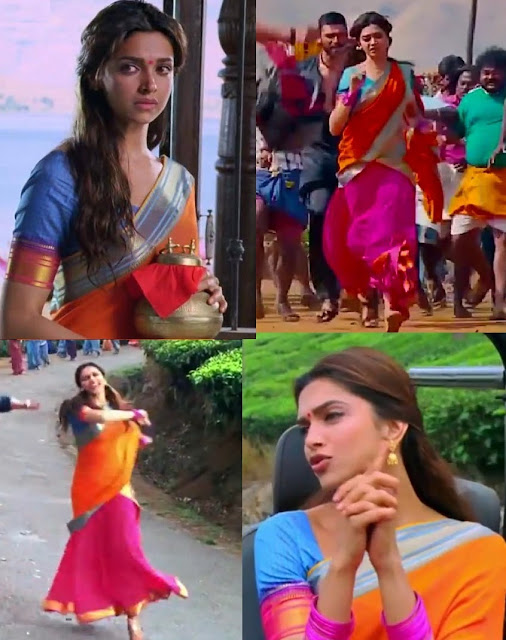 I've seen navy and pink paired together a few times with Asian outfit, and it works nicely here - I also love the fact that with each of Deepika's outfits, she accessorises with pretty earrings and bright, colourful bangles which look very striking. As with the other outfits, the draping of the dupatta is the same so that it looks more sari-like. 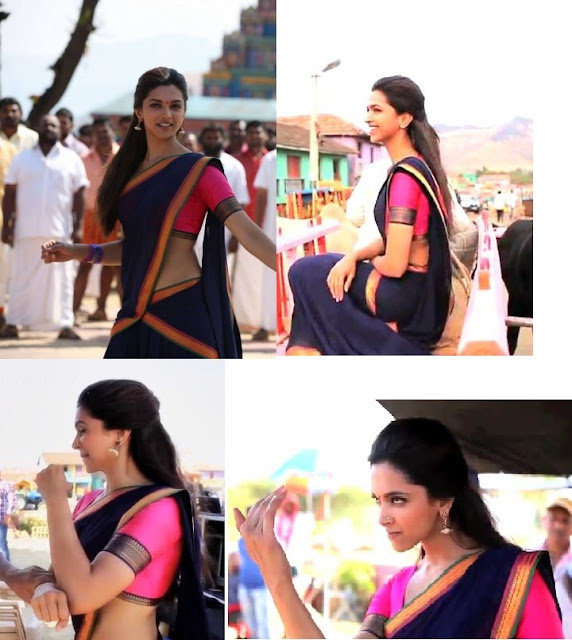 This was a more of an icy, light blue colour, which looks quite interesting with the yellow piping - I'm not sure whether I like this colour combination or not, but I do love Deepika's wavy hair with this outfit. 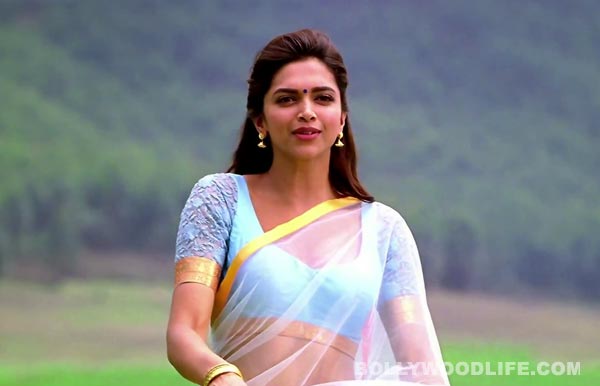 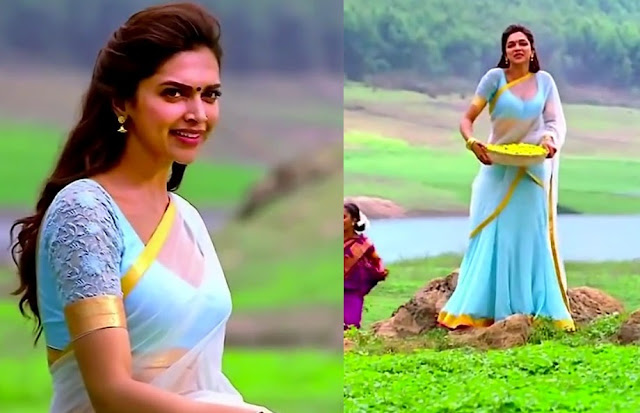 This is another outfit which caught my eye, a pink skirt with a white blouse, which gives different shades of pink and orange - of course, accessorised with red bangles. 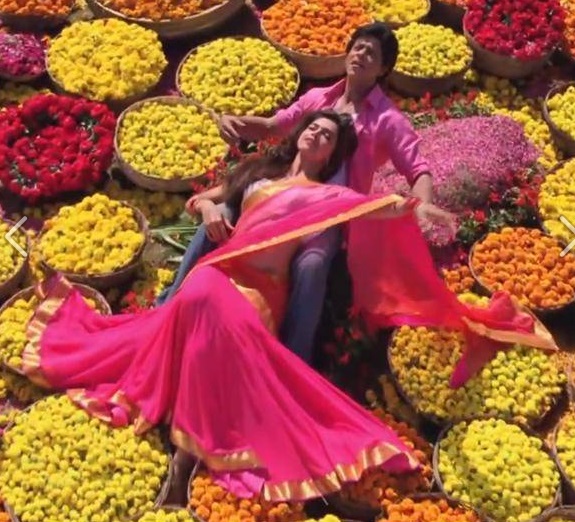 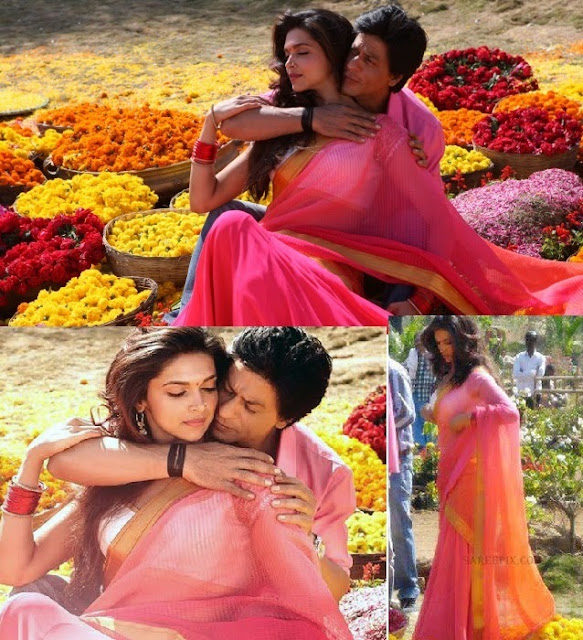 I also liked this royal blue sari, which is a very flattering, rich colour and had a similar look with the banarsi edging with a hot pink sari. Again, the jasmine in her hair made a nice touch, with the simple jewellery and striking bangles. 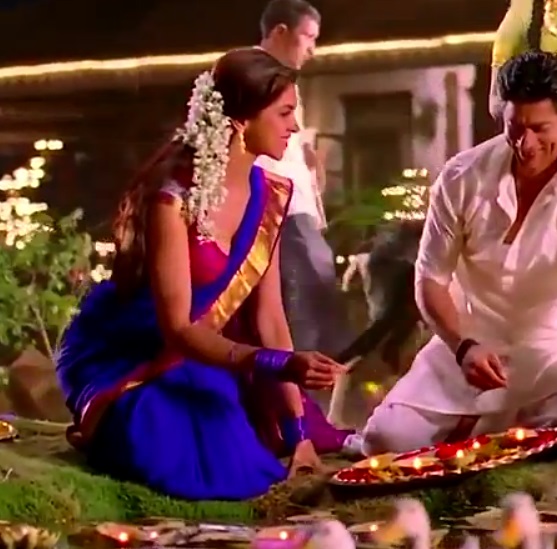 Being a Bollywood film, there was of course, also a bridal outfit, which in this case was a red and orange brocade sari, which looked quite traditional with Deepika's jewellery and the flowers in her hair. I liked that they kept her make-up quite neutral, and the outfit itself seemed quite faithful to South Indian traditions (although I could be wrong here!) 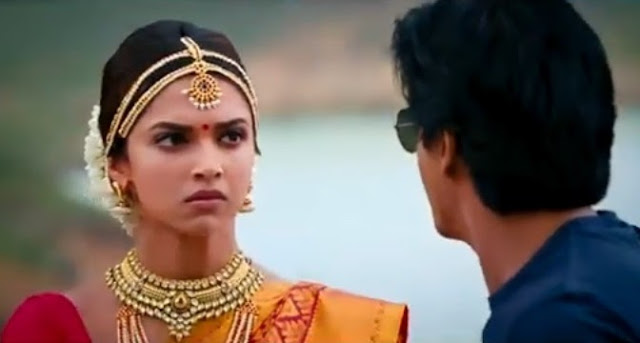 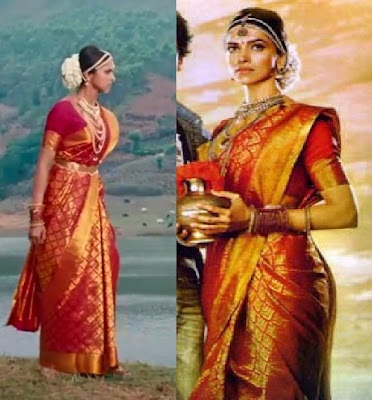 Lastly, I also loved this sari, which was quirky yet really appealed to me, mostly because of the bright colour and the chequered sari. There's something about this sari which reminds me slightly of modern designers such as Masaba, where the focus is on bright colours and prints and less work or embroidery, I also really liked the coral blouse which is matched to Deepika's lipstick, which looks great on her and which adds a really pretty pop of colour. 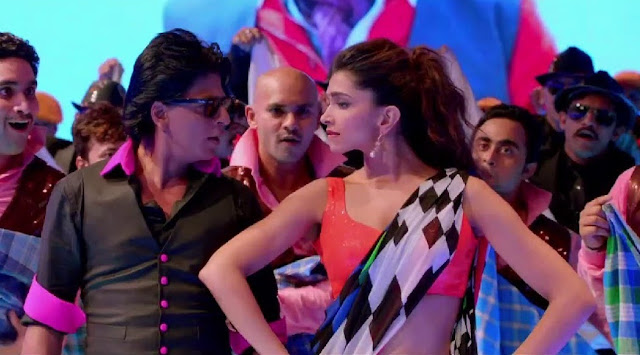 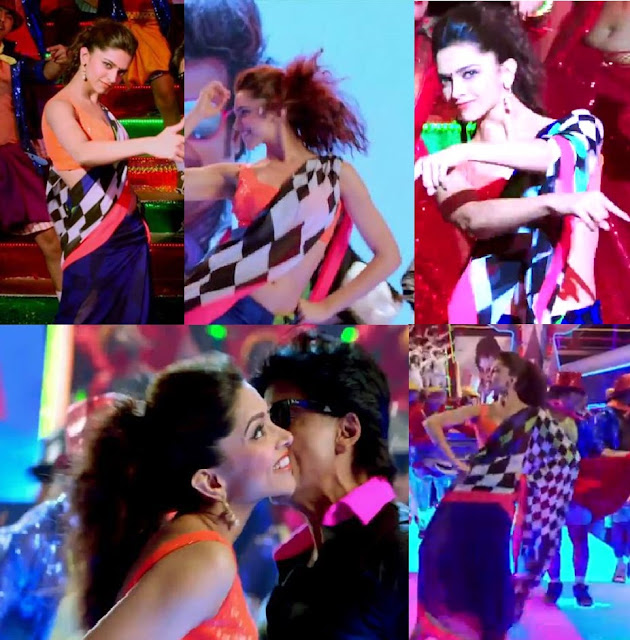 All images belong to directors/producers of Chennai Express

There were a few more outfits in this film which I haven't included, which looked quite similar to the ones above (but in various different colours), and which Deepika pulled off beautifully. I found the costumes of this film a great colour inspiration - certainly I can imagine a lot of these outfits and colours as mehndi outfits or even wedding ones.

I wouldn't mind having a simple lengha-sari inspirred by one of these outfits, in a bright colour and similarly-flowey skirt, although I would probably add a fuller blouse, and perhaps three-quarter length sleeves. Overall though, I think Deepika looked great in this film, the styling was done well, and her hair and make-up are simple but effective.
Posted by Curly Fry at 14:34