I saw Bin Roye this weekend, and left the film in love with the beautiful outfits, sets and scenes. Mahira Khan looks amazing in the film and the film itself is really, all about her. I haven't seen many Pakistani films over the years, and I'm not sure this one falls into Lollywood (which I remember from my childhood being Punjabi films with a lot of shouting, over-acting and heroes jumping off buildings!)

I wanted to post some of the outfits showcased in the film - the images below are from both the film and also from the launch of Bin Roye's music at Telenor Bridal Couture Week 2015 last month, where the designer outfits worn were modelled by the main actors and reknowned Pakistani models.

First is this iconic outfit by Feeha Jamshed, which I love the colour combination of - yellow, royal blue and bronze accents. I've seen a few outfits in the Pakistani fashion trends with sequins all over, it works on some and doesn't on others - this one pulls it off with a lovely sparkle and glamour. 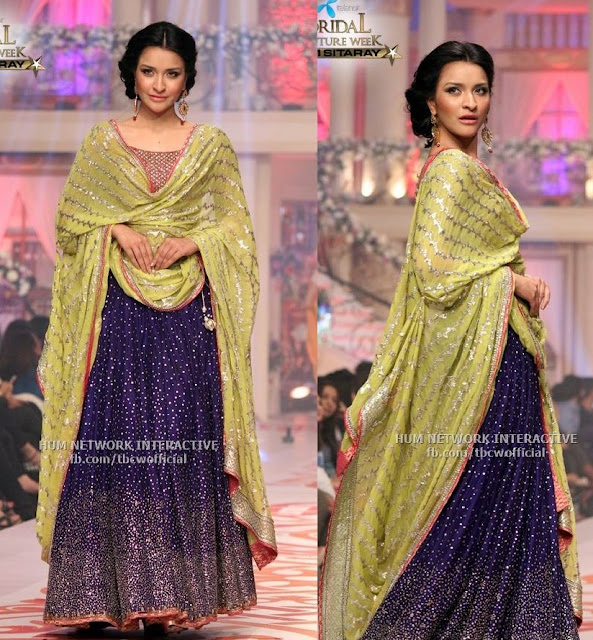 This is the outfit as worn by Mahira in the 'Balle Balle' song, which is actually a fun song because it reminded me of some of the dholki songs my sisters and I know. This is one of my favourite looks on Mahira mainly because of the swishy skirt and the simple block colours which work well together. 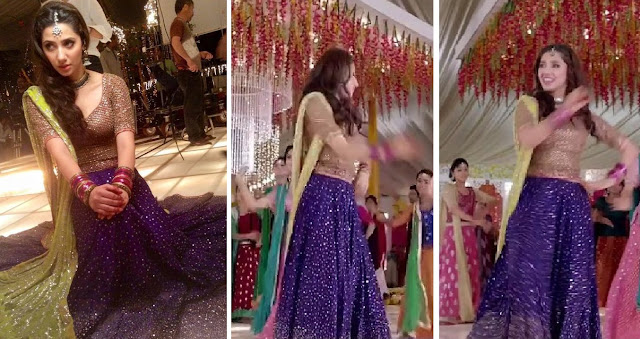 The next outfit I immediately recognised was this Elan outfit, from PFDC L’oreal Paris Bridal Week in 2012 - I recognised it especially because it's a pretty popular outfit and I love the soft colours and the heavy work. I couldn't find a picture of Armeena Khan wearing it in the fil, but it looks pretty much the same (except she has the dupatta pinned to her head in a bridal style). 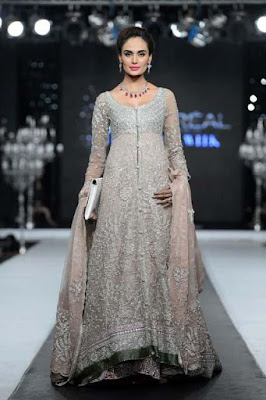 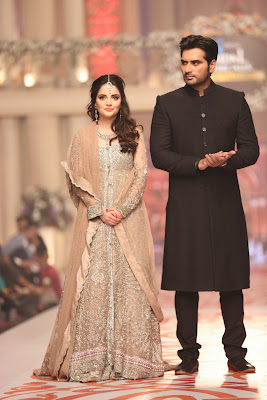 I also loved this bridal by Sania Maskatiya, which was really pretty in orange, red and yellow, and ideal for the mehndi scene. It's a very traditional look which you just can't go wrong with, and looks pretty much the same as worn by Armeena on the catwalk (except the border of the dupatta which looks slightly different but that's minor) 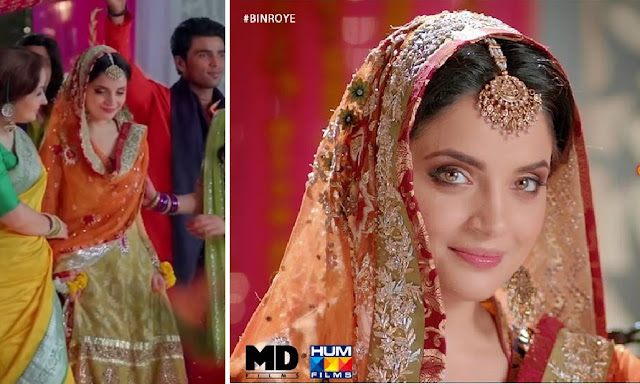 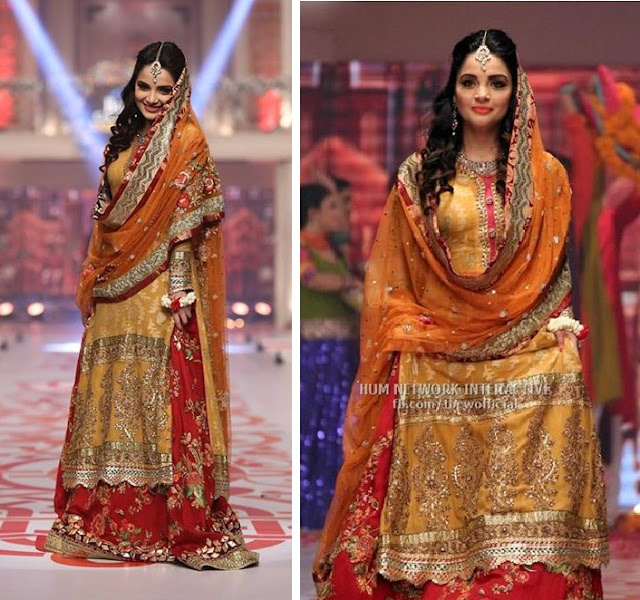 It took me a good while to find out where the next outfit was from, I had to ask a few of my friends who are fashion aficionados like myself before I found out it was by Elan (I kept thinking it was Elan because it reminded me of their older designs) I liked the classic cut of this outfit but was less keen on the two-tone look of the fabric and the colour of the dupatta, which I think would have worked better as a deeper colour. 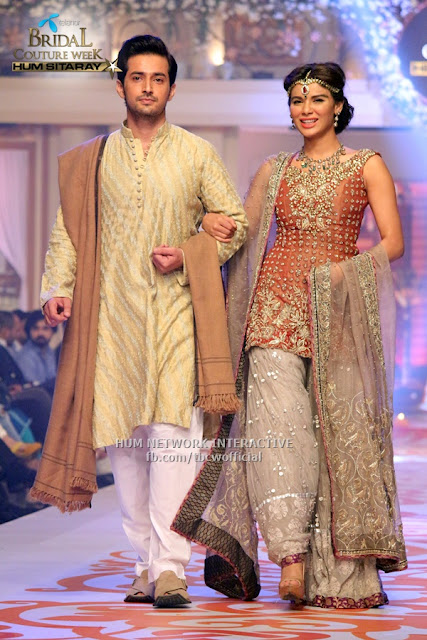 This is the outfit worn by Mahira in the film although with a skirt rather than with a salwar - I loved the brocade print of the skirt and the deep teal colour of it, and thought it went with the rust coloured kameez pretty well. 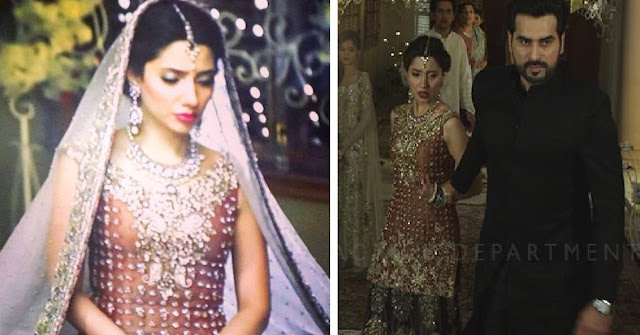 I also loved this sharara outfit which was modelled by Sabeeka Imam in the Bin Roye music launch, I couldn't find a picture of Mahira wearing it but it looks the same, except Mahira has her hair loose! It's a lovely traditional outfit and I think it works well as a formal. 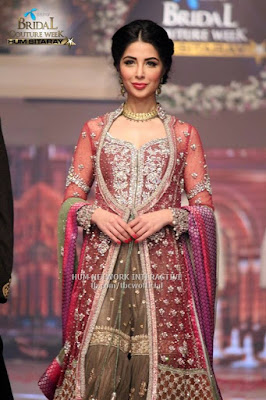 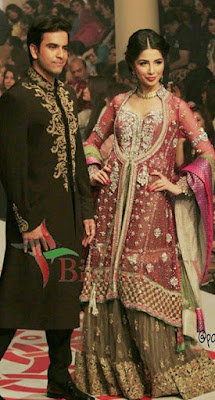 The last bridal I found from this film is another Elan outfit, although I don't remember seeing this one in the film even though it was part of the Bin Roye catwalk, so I either missed it or it didn't end up in the film.

This outfit is a traditional deep red and purple outfit which is really heavily worked - I liked it but I found it a little too heavy as a bridal, and it not something I would pick myself. I liked the way it was styled on the model, although the jewellery on Mahira looked lovely too. 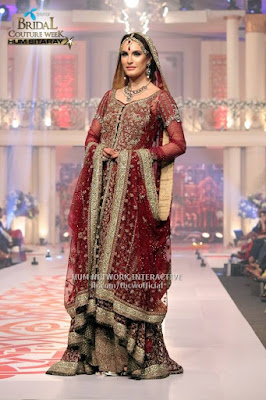 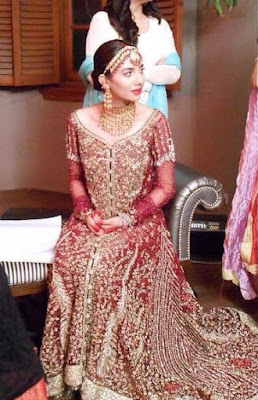 I also liked some of the simpler outfits worn by Mahira, I won't post them all but you can see the rest here - there were a lot of simple Punjabi-style salwar kameezes and casual suits which I thought was a nice touch for the casuals-at-home-look.

Both of these remind me of other outfits I've seen in other films before, but Mahira looks lovely in them because she keeps it simple, her hair is loose and the jewellery is never overdone. 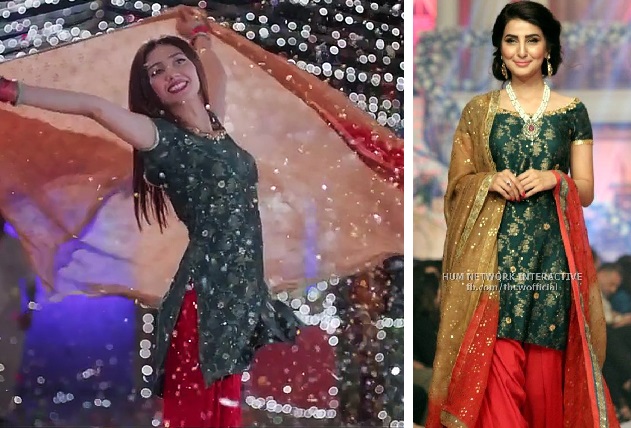 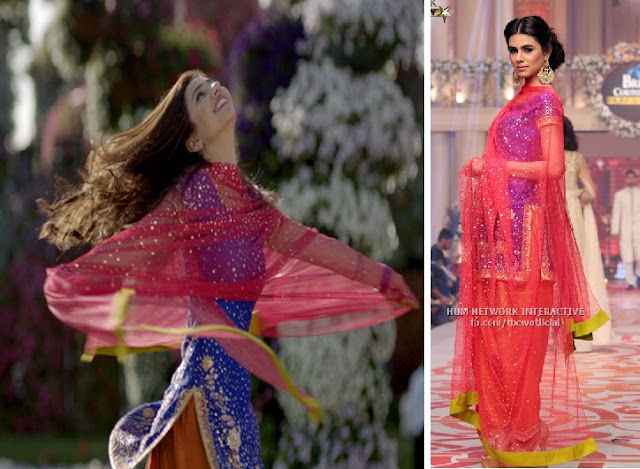 The last few outfits I wanted to post were these Elan (1 and 2) and Sania Maskatiya (3) ones below that are also worn in the film, which I loved because of the colours and the floral embroidery - all perfect wedding formals and Eid outfits! 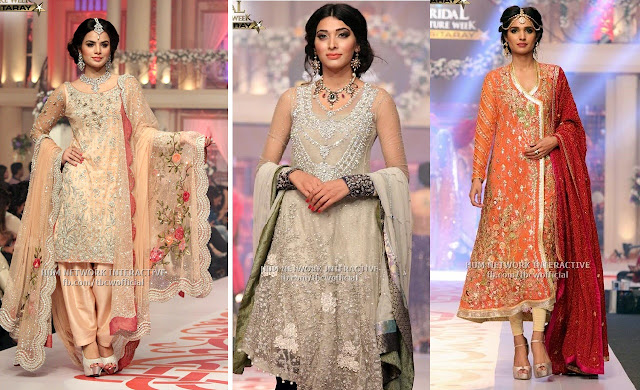 The film itself was a nice watch, a little too girly and romantic for me (I do like my sci-fi!) but I went with some close girl friends and we had a lot of fun watching the film. It was also nice to see some Eid scenes and Chand raat scenes as well, which was fun and made me want to visit Pakistan!
Posted by Curly Fry at 12:37