I've never been a real fan of lip glosses when wearing make-up because they usually leave my lips feeling sticky, or the colours don't feel very visible (not to mention getting flyaway hair stuck to my lips!) - I haven't really worn lip glosses since I was a teenager.

Recently though, I've become crazy about matte liquid lipsticks, which look like lip gloss but wear like lipsticks - they're long-lasting, they're matte and they are highly pigmented. I've built up a small collection of liquid liquids over the last few months, especially as these tend to what I reach for when I go to work, when out with friends and even to a few dos - it's convenient that they last all day and I don't have to re-apply or worry about it coming off when I eat (which is a problem with some of my usual lipsticks).

There are several brands which have launched their own collections of matte liquid lipsticks, some which are better than others. I've tried out a few brands which I'll write about below, although there's still a few other brands which I'd like to try.

Lime Crime have a popular range of matte liquid lipsticks, a collection call Velvetines, which started off just with two collections, and which has now grown 7 colours in the collection. I have been hankering after a Velvetine lipstick for a while, and finally put myself out of my misery to buy some. Because this is an American brand, it wasn't easy to find, but for those who are interested, I bought mine from here. I bought two shades,  Red Velvet and Suedeberry, both which looked really good on the swatches I saw online. 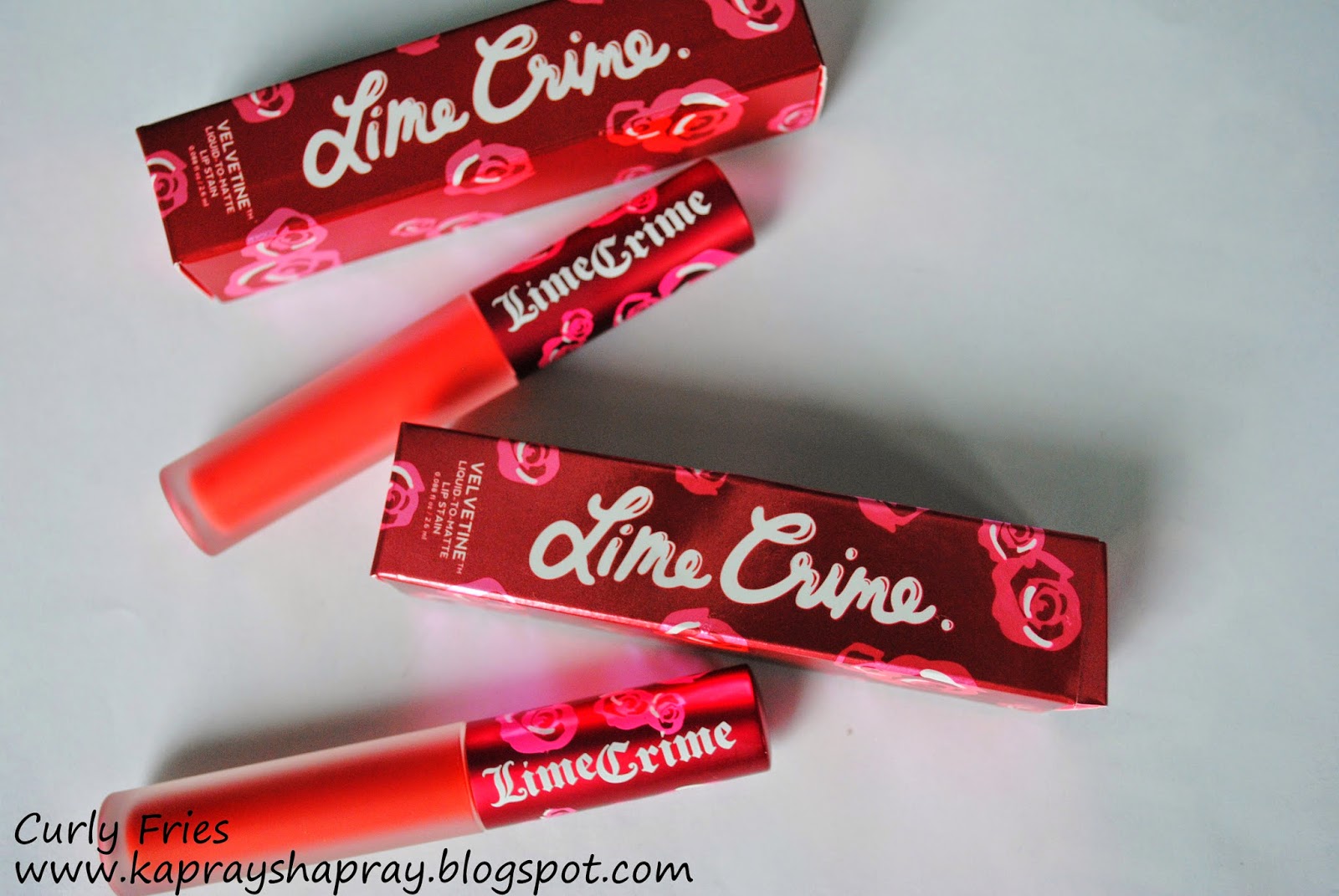 The Red Velvet shade was surprisingly not as deep as I thought it would be - it has a slightly coral base to it which made it brighter. When I wore it, it looked a lot like it did on this beauty blogger - although on me it wasn't as neat! Suedeberry on the other hand, was a very bright, orangey-coral colour, which took me a while to get used to. It's also a slightly chalky orange, so I needed some base underneath to make the colour 'sit' properly on my lips and also give a little moisture. The closest colour I can show for the orange shade is probably this (for some reason, on the beauty bloggers I followed online it looked slightly redder). Out of the two, I preferred the Red Velvet shade, it's really easy to wear and suits my skin tone a lot - and it's also a very pretty colour too. 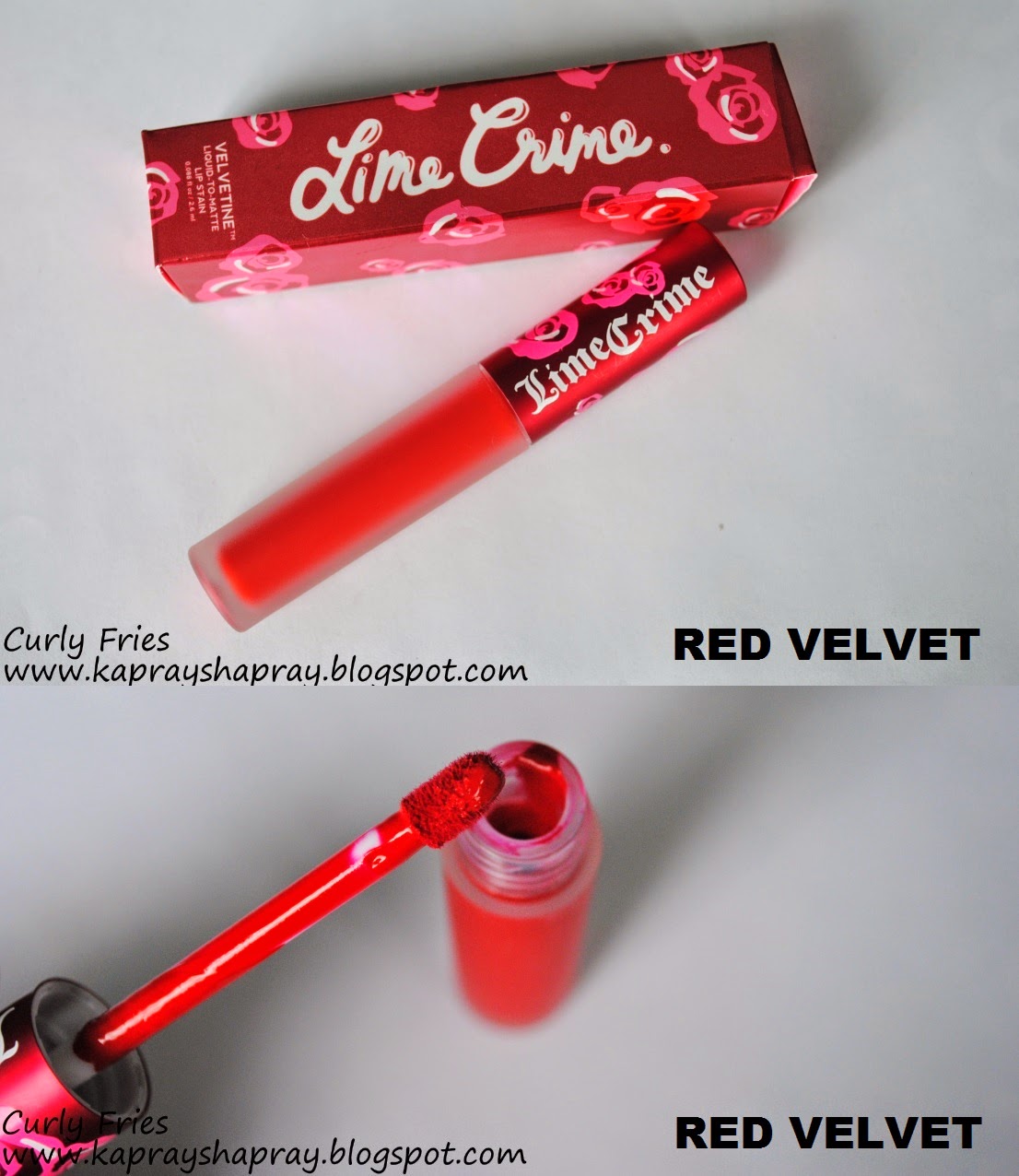 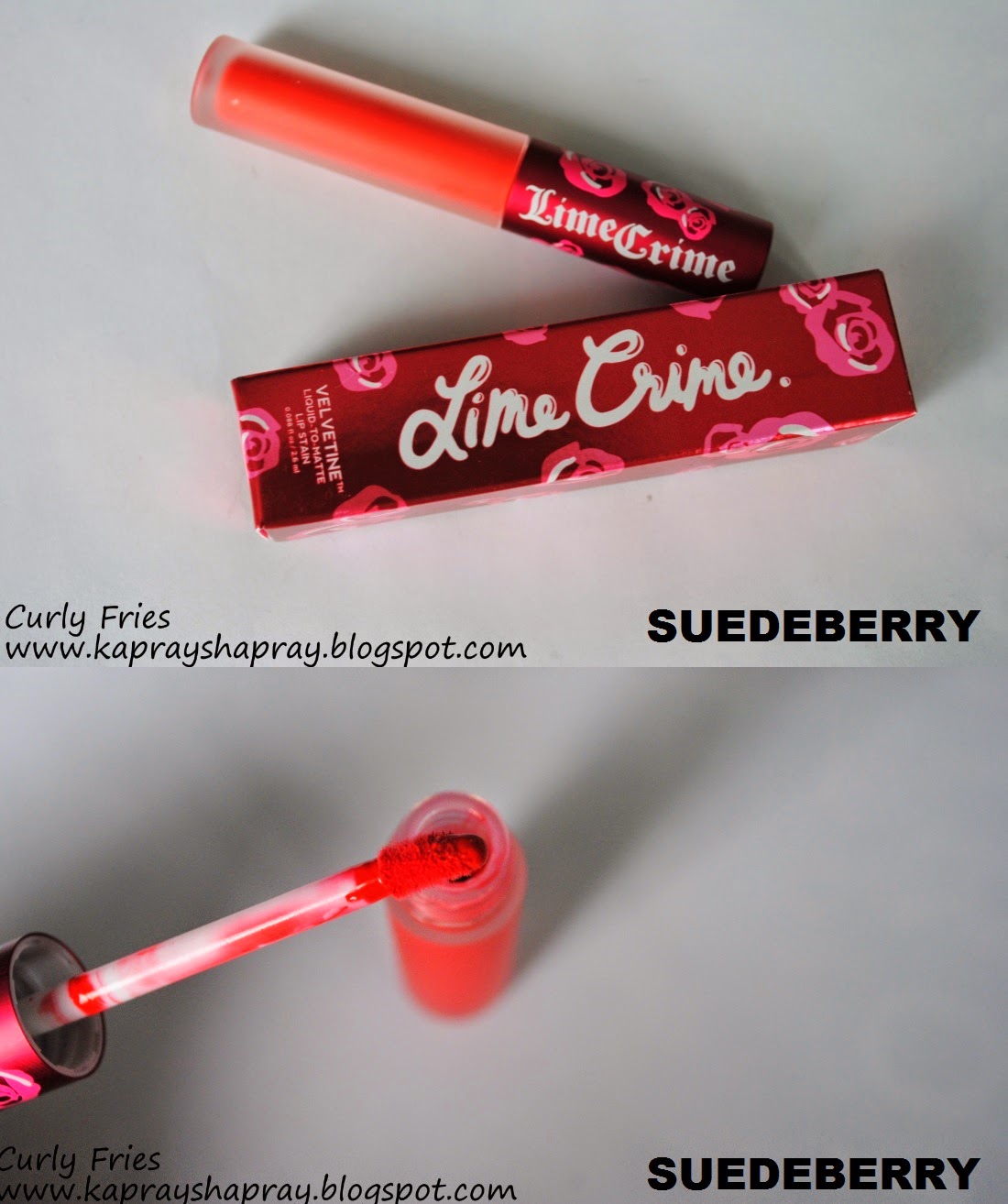 A brand I have been using a lot lately is Sleek, whose liquid lipsticks - Matte Me - I'm really in love with. The colours look exactly the same as they do in the tube, they're easy to apply and very pigmented, and I eventually ended up buying all the colours they had because they're reasonably priced and I found the colours so flattering. The pinkier and purple shades have been a lot more flattering on my lips than the lighter shades though, which I need a base or a lipliner with in order to make the colours pop. 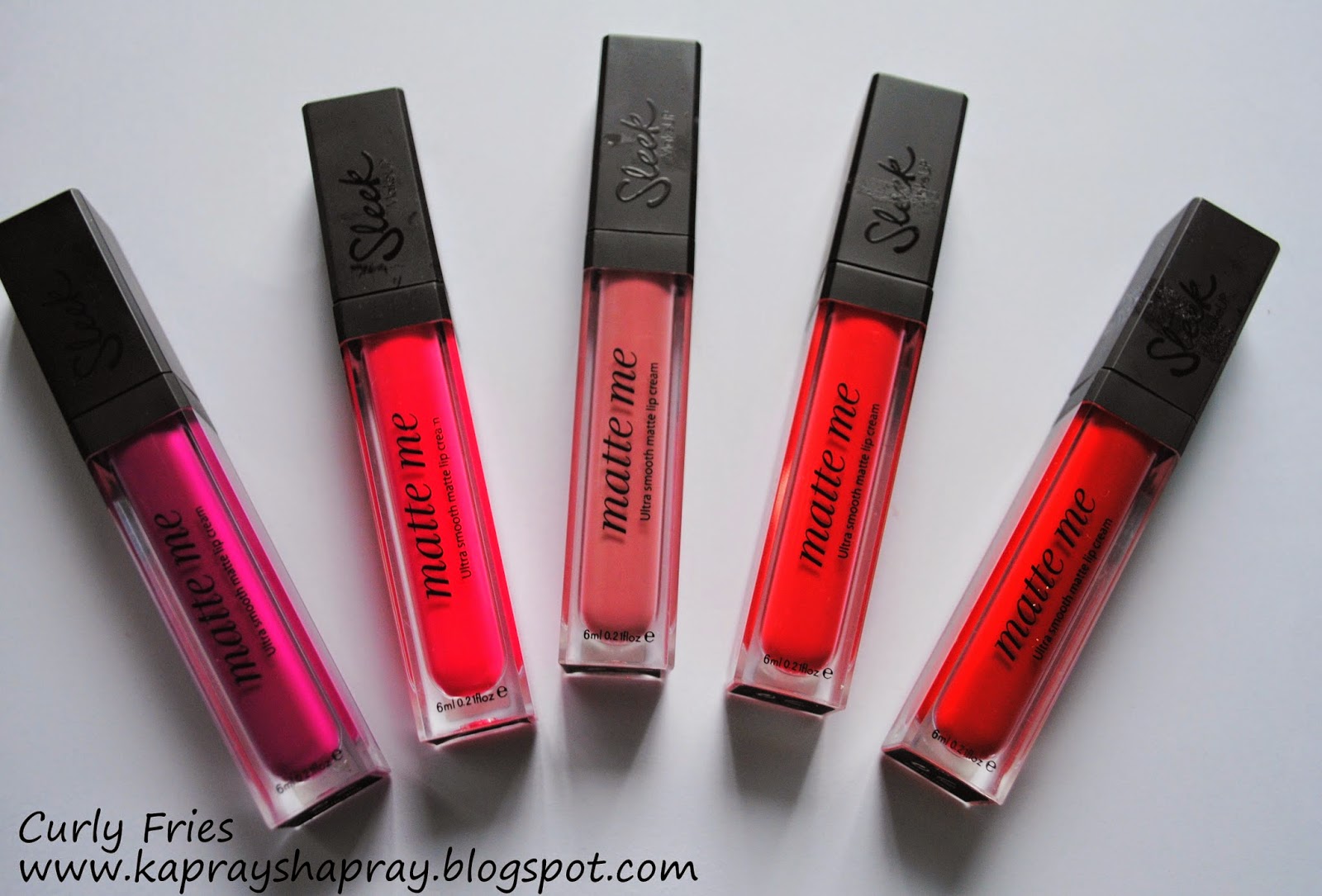 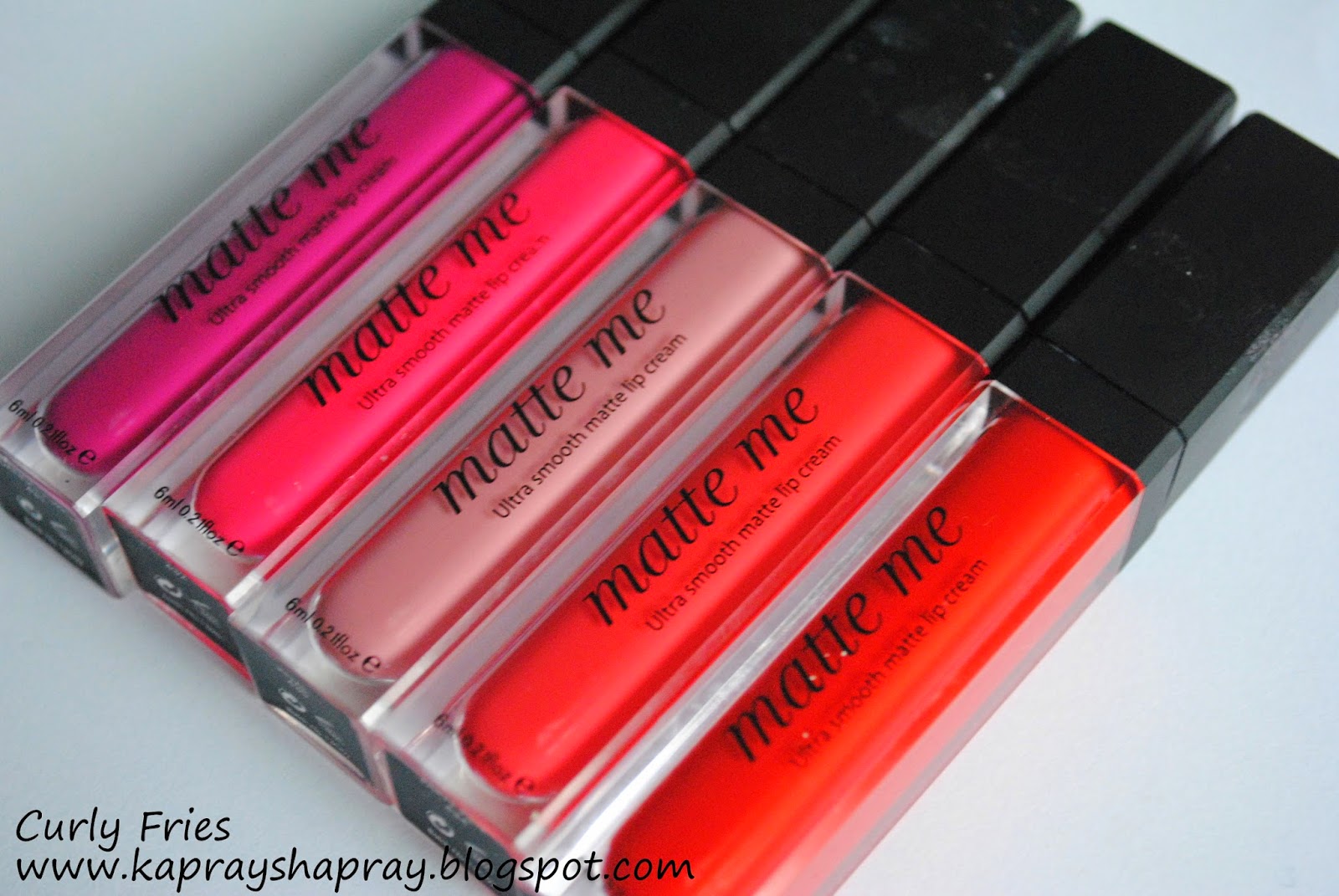 I've also gotten my sisters and sister-in-law to try these, and they've all had various preferences over which shade they like, but my favourite by far has been the purple shade, Fandango Purple. This is how the purple lipstick looks on me, it's a very pretty purple-pink shade which has gotten me compliments everytime I wear it. It also lasts the whole day on me, although it slowly fades away a little in the middle of my lip to a more hot pink shade unless I re-apply at the end of the day or if I have oily food.

I've also discovered a few matte liquid lipsticks by Bourjois, who also jumped on the bandwagon recently with their new Rouge Edition Velvet collection. I found these a little creamier than the Sleek lipsticks, although colour-wise, there were a few similarities. I bought a few hot pink and cranberry colours in this brand, and was also glad to see a dark red shade which I've been wanting to try in a liquid lipstick, especially as most that I have seen so far are the brighter shades of red. 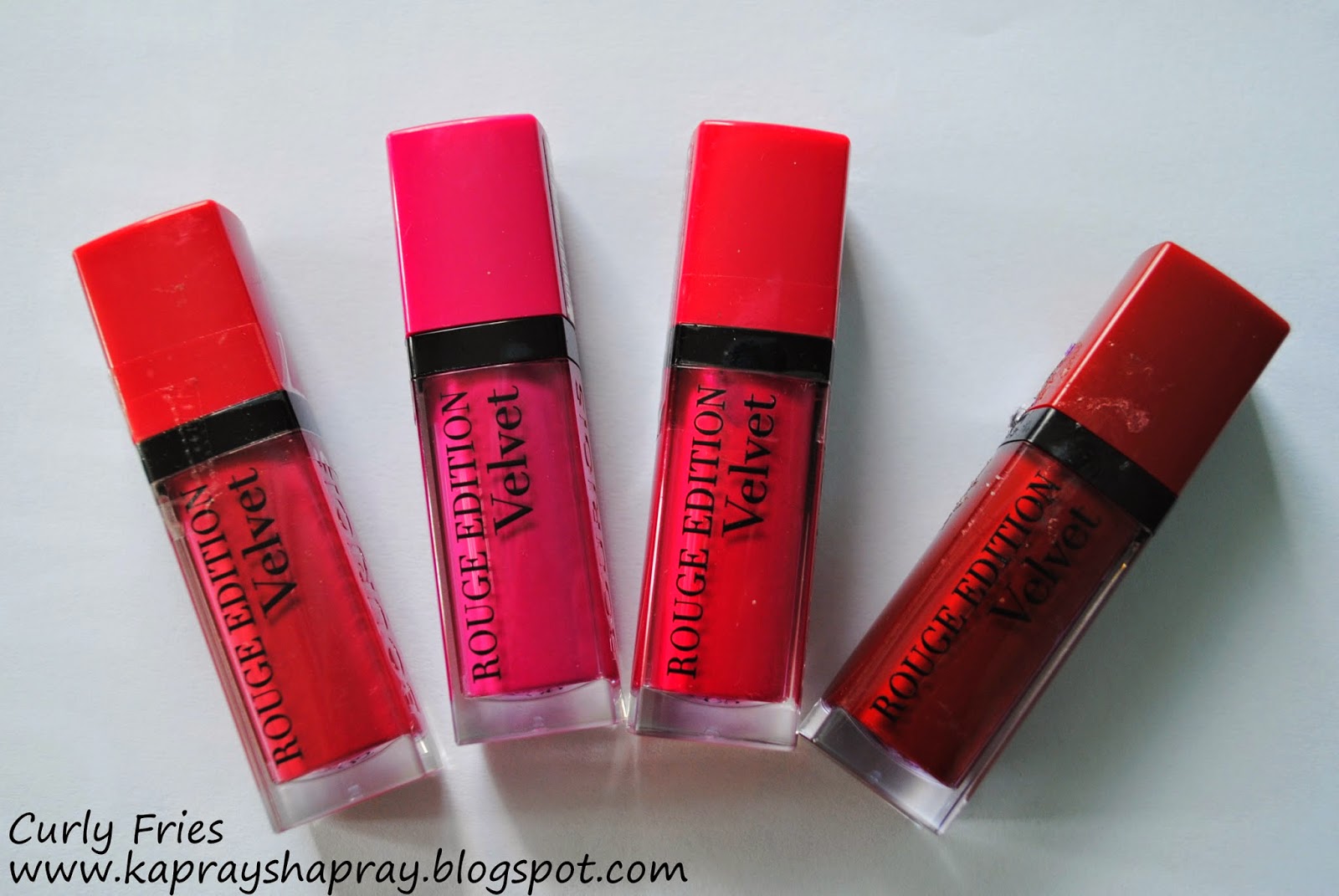 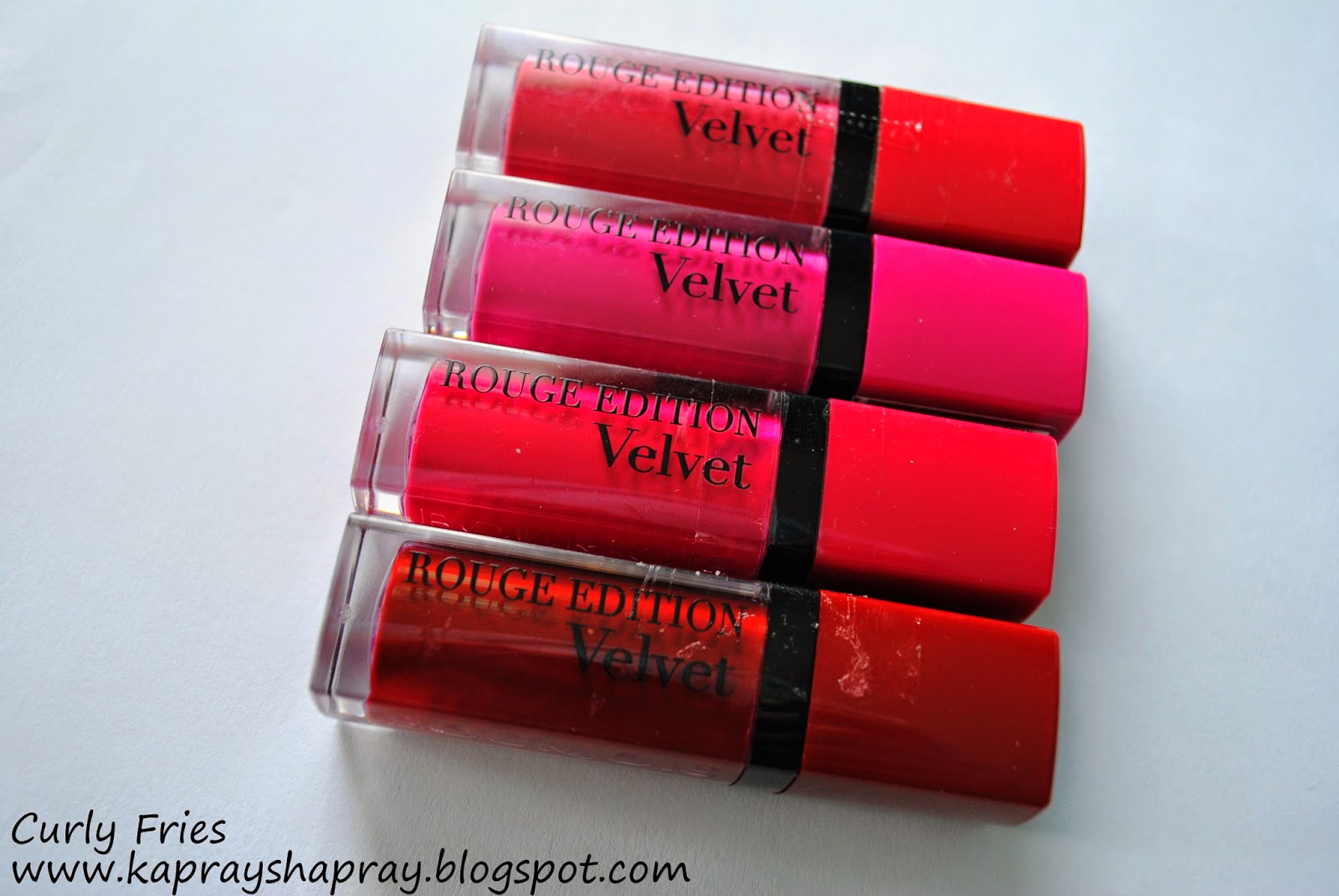 The shade Pink Pong was the most flattering on me, it's a pretty hot pink colour with a slightly blue base which I really liked. I think this is a shade which would suit almost anyone, and it's a very easy colour to wear - the colour on me was similar to this beauty blogger. The other two pinks are a little less bright and vibrants, but are still very pretty, easy colours to wear, both perfect for everyday wear as well as a day out. I only bought the dark red shade Grand Cru recently (you can see the sticker marks on it!) but I imagine it will look very rich and red, something I'm looking forward to trying. The finish of these lipsticks are all pretty good, they feel light without being drying or looking flaky - I've been eyeing up the other colours to see what they're like too.

MUA has also got a collection of lipsticks called MUA Luxe Velvet Lip Lacquers, which are the cheapest of the bunch at £3. Like the other brands, there are some very bright colours available, although these may not suit everyone's tastes. I bought one of these in Reckless, which is a red shade that I thought was wearable, but not amazing. I think that for what they cost, they're not bad, but the quality isn't as great as the Lime Crime or Bourjois lipsticks, especially as this lipstick peels lightly as the day goes on. 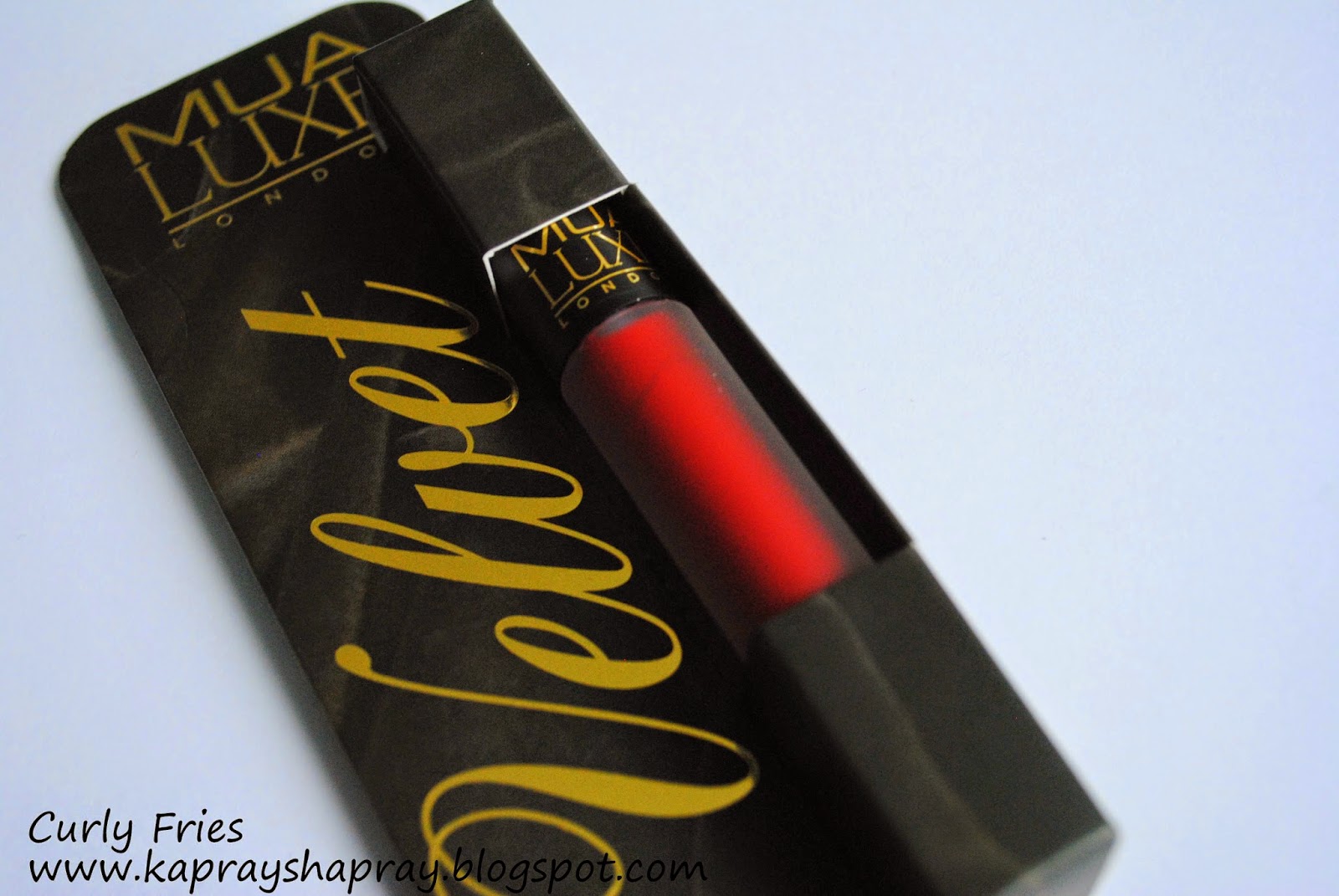 Revlon has had long-lasting liquid lipstick for a while, their ColorStay collection is a little more sober in colours though. My mum has used some of their nude and pink shades for a long time, and even I have a tomato coloured liquid lipstick in this collection that I use every now and then (I forgot to take pictures of mine though!) 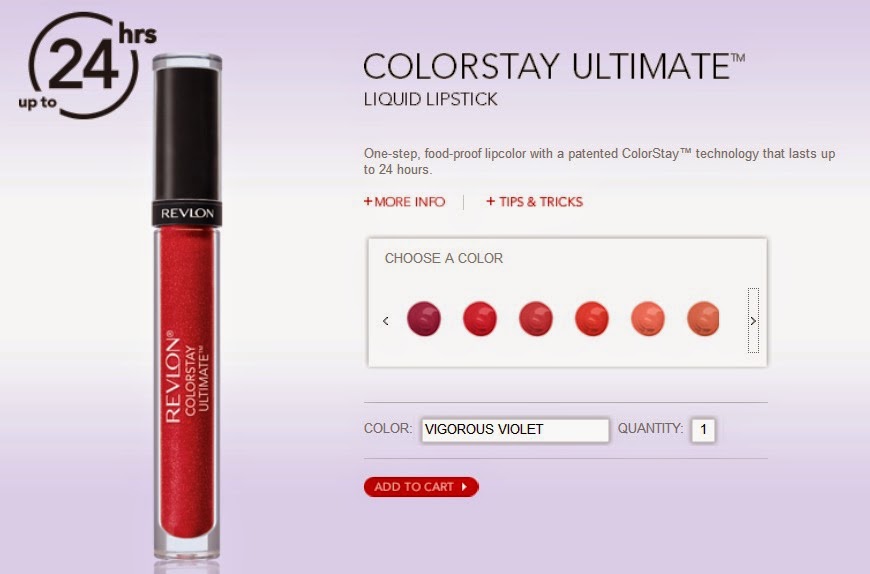 TopShop make-up is another that I've been hearing good things about - I have a highlighter by them which I love because it is surprisingly one of the better ones I have. So naturally, I wanted to check out their liquid lipsticks, which they had a range of, one called Lip Paint (which is creamier) and another called Lip Varnish (which is more of a shiny lacquer). Both are in very bright shades and long-lasting, although I didn't end up buying any because I didn't think any of the shades below would suit me, and the colours that would I already had shades of in other brands. Topshop also does Velvet Lipstick but as far as I can see, it's only in a black shade. I did end up buying a Gloss Ink in a pretty cranberry shade called Smitten which is like a pigmented, glossy lipstain. 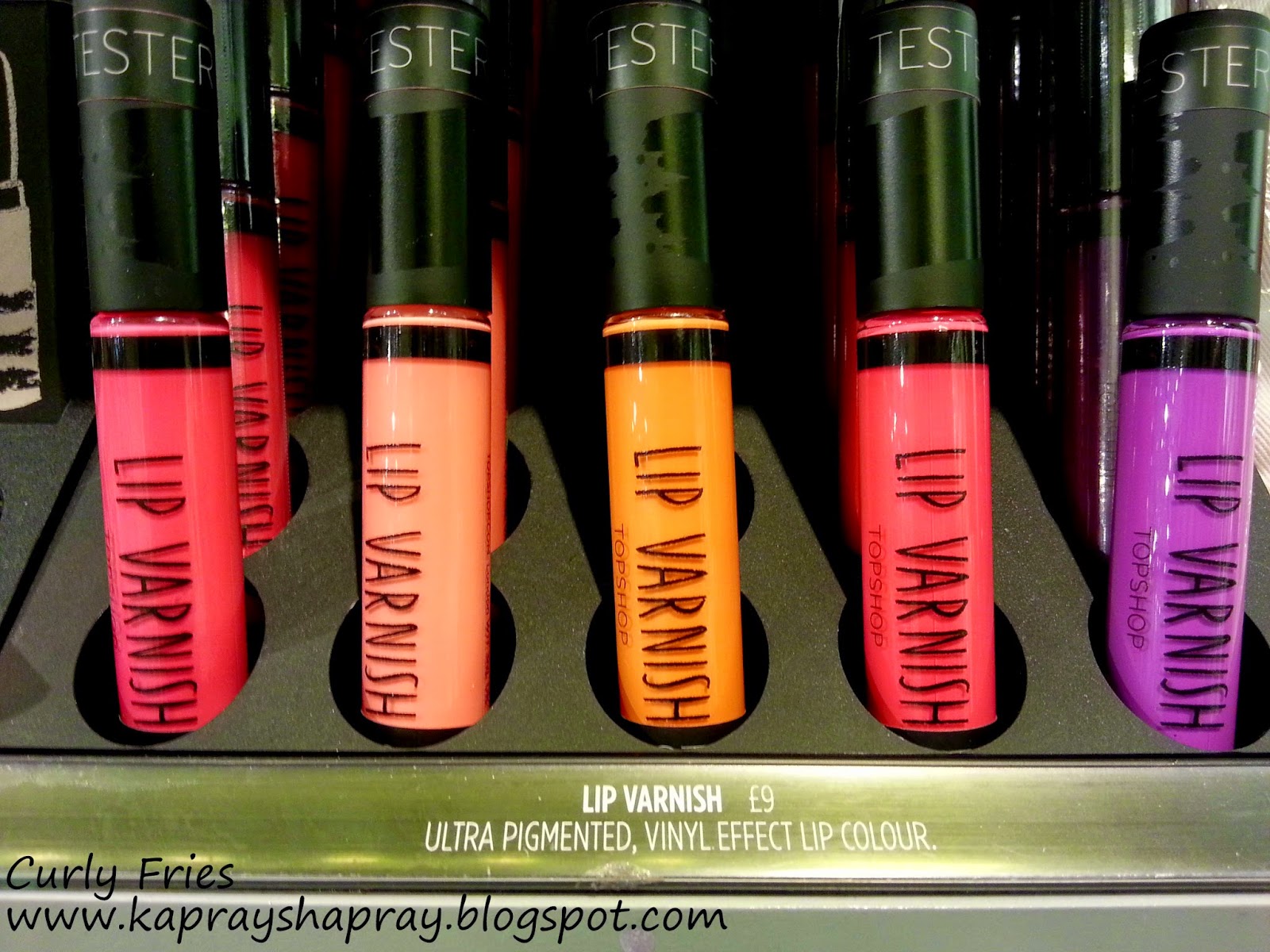 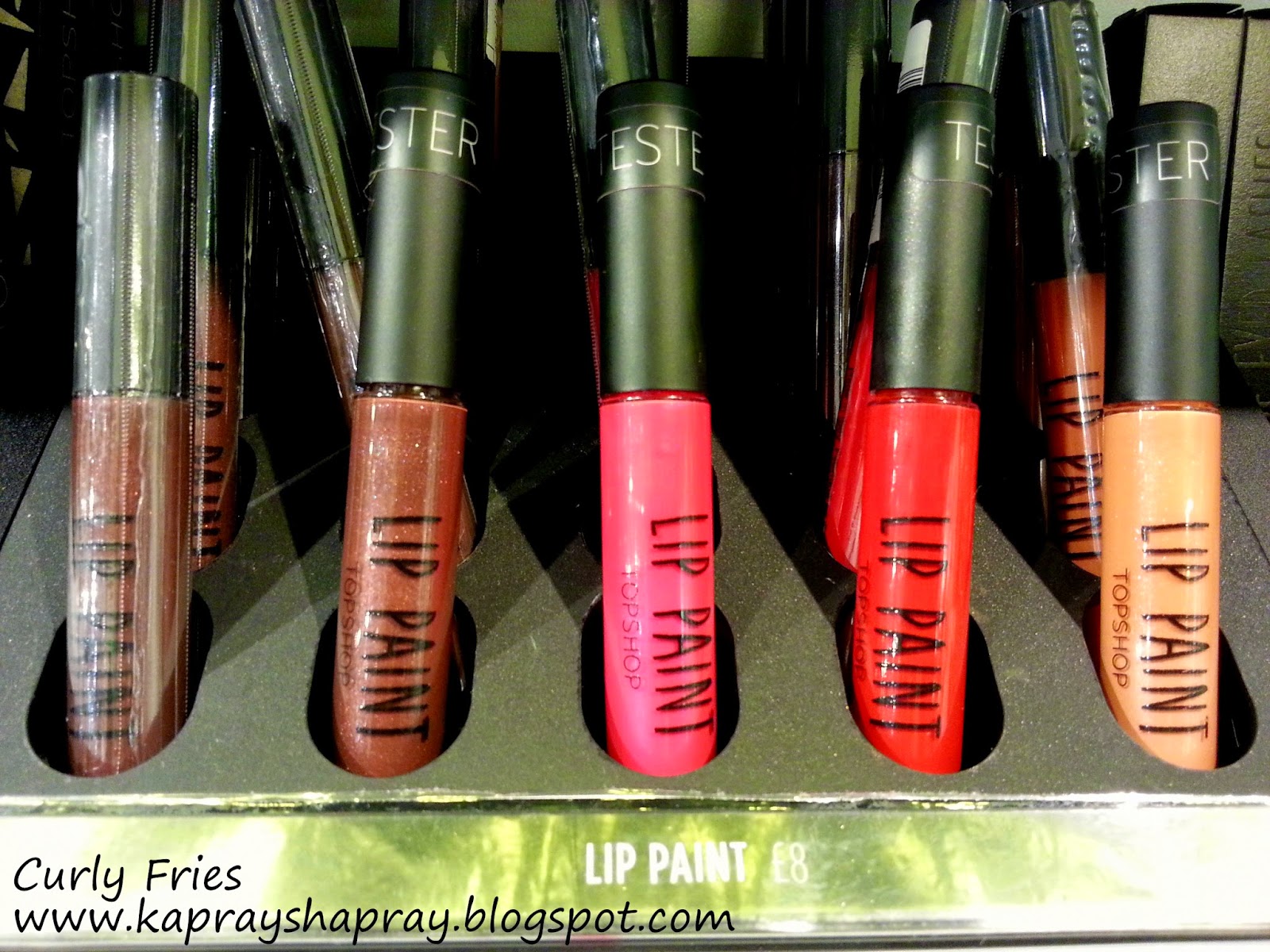 I know that there are other brands which do liquid lipsticks as well, although I haven't tried them myself - there are a few higher-end brands like Hourglass and Guerlain; Illamasqua also have a popular liquid lipstick and Stila are also another, and NYX have a big collection which I've been wanting to try out. Lastly, Lush are another brand I've been eyeing up, their products are natural and come in pretty shades, but the down-side is that there is an expiry date of a year, which I'm still trying to decide whether I want to buy or not.

Overall I can see liquid lipsticks becoming more popular, they're not as fussy as normal lipsticks, they look beautifully elegant and they're very flattering. Who knew something which looks like a lip gloss would look as good as it does!

What do you think of matte liquid lipsticks - passing trend or here to stay? Which ones have you tried?
Posted by Curly Fry at 11:17