The costumes in 'Laagi Chunari Mein Daag' are beautiful, and they would be, having been designed by the wonderful Sabyasachi. Throughout the film the actresses wear outfits which are beautifully colourful, outfits (which usually are plain kameezes with colourfully printed dupatta scarves, like this), and which I actually found quite charming because of simplicity of them.

There was one, outfit which stood out for me the most, and which I really liked. At the wedding scenes in the film, Rani's character wears a beautiful green and cream lengha-sari which I loved - the drape of it is very flattering and I love the motif design on the sari drape as well as the flattering cut of the skirt. I'm also a big fan of the longer-sleeved blouses for saris, and here it looks lovely, simple gold and green print yet effective - I can imagine this being a perfect sari to wear to a friend's wedding! 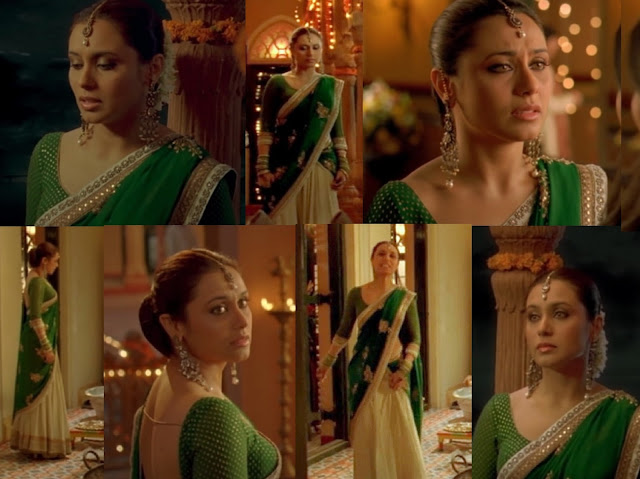 I also really like Rani's understated make-up here, with goes well with her beautifully sleek bun with the traditional  jasmine flowers in her hair. Her make-up seems to be a golden wash of eyeshadow with natural pinky lips, which I thought was very subtle but flattering, and something which makes her eyes look more striking too. My favourite thing, though, has to be the extravagant crystal earrings she is wearing, which are huge but look quite elegant.

I also thought I'd mention Konkona Sen Sharma's character's lengha-sari, which is a traditional bridal red, and has a similar look to it with the banarsi print blouse and worked sari. I didn't get a good look at the full outfit properly, but it has the similar look to Rani's one - plain gold and red printed blouse with a beautful skirt and the drape of the sari pinned on her shoulder in an elegant way. Again, Konkona's make-up is subtle and light, so that it doesn't look too much, and balances well with her jewellery, which is great since she has a petite face and it wouldn't suit her to have too much. 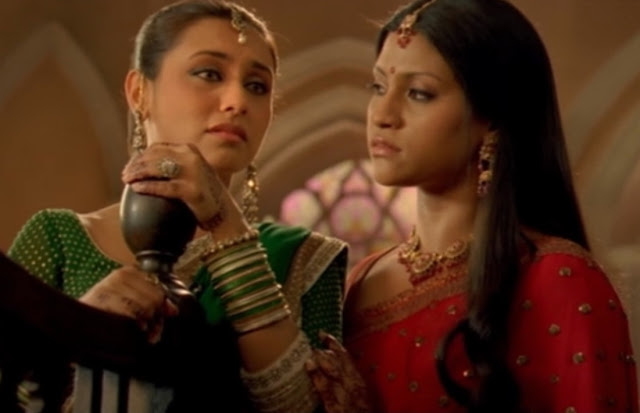 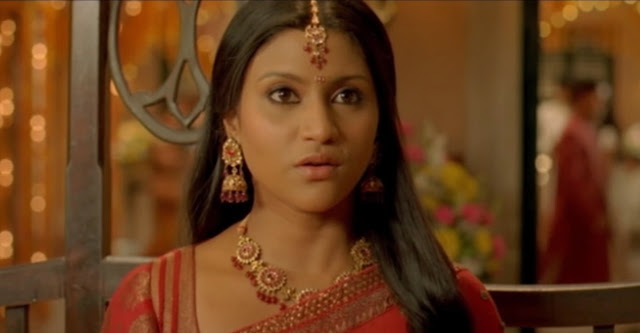 I think I liked Rani's green sari more than the red sari worn by Konkona, but this is because I love the shade of green she is wearing. I find the red shade that Konkona wears elegant, but not a flattering shade on everyone, since it is quite 'bronzey' which may not always suit younger women. I would love to have a lengha-sari like Rani's green one here, it looks very classic and the traditional - and still has a Sabyasachi signature look. While I would get a longer blouse made to cover my stomach, I think the way the sari is draped is very flatttering, and it's definitely something I would like to try with a sari.

Which sari do you prefer?
Posted by Curly Fry at 15:42